The goal of the CiPA initiative (Comprehensive in vitro Proarrhythmia Assay) was to assess a more accurate prediction of new drug candidate proarrhythmic severe liabilities such as torsades de pointes, for example. This new CiPA paradigm was partly based on in silico reconstruction of human ventricular cardiomyocyte action potential useful to identify repolarization abnormalities such early afterdepolarization (EAD), for example. Using the ToR-ORd algorithm (Tomek-Rodriguez-O'Hara-Rudy dynamic model), the aim of the present work was (i) to identify intracellular parameters leading to EAD occurrence under healthy and hypertrophic cardiomyopathy (HCM) conditions and (ii) to evaluate the prediction accuracy of compound torsadogenic risk based on EAD occurrence using a large set of 109 torsadogenic and non-torsadogenic compounds under both experimental conditions. In silico results highlighted the crucial involvement of Ca++ handling in the ventricular cardiomyocyte intracellular subspace compartment for the initiation of EAD, demonstrated by a higher amplitude of Ca++ release from junctional sarcoplasmic reticulum to subspace compartments (Jrel) measured at EAD take-off voltage in the presence vs. the absence of EAD initiated either by high IKr inhibition or by high enough concentration of a torsadogenic compound under both experimental conditions. Under healthy or HCM conditions, the prediction accuracy of the torsadogenic risk of compound based on EAD occurrence was observed to be 61 or 92%, respectively. This high accuracy under HCM conditions was discussed regarding its usefulness for cardiac safety pharmacology at least at early drug screening/preclinical stage of the drug development process. 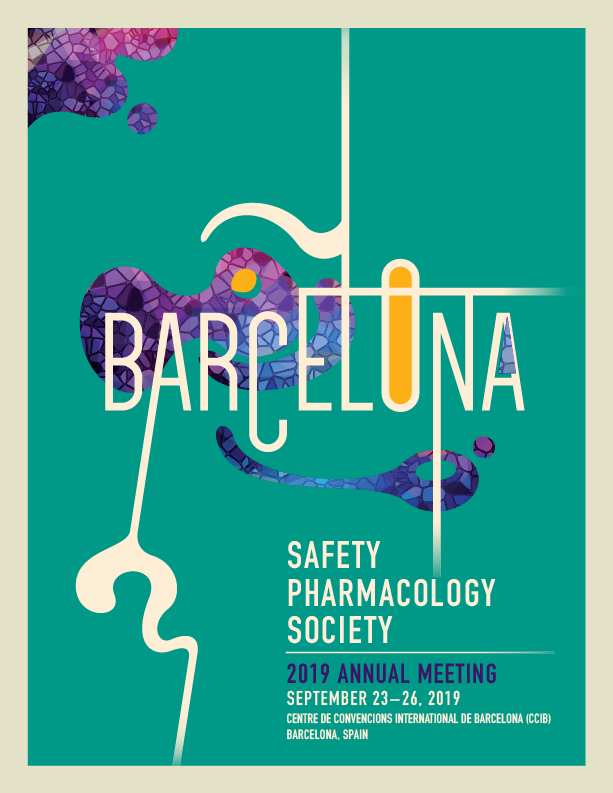 Journal of pharmacological and toxicological methods, 105, 38

Recently, the marketing authorization for fenspiride containing products has been suspended in the EU due to reports of QT prolongation and torsade de pointes. As indicated in the Public Assessment report for Fenspiride, a total of 5 cases of QT prolongation including 3 cases of torsade de pointes were reported since the marketing of fenspiride. Most of these cases were in patients which had known or suspected risk factors for QT prolongation or arrhythmias (e.g. congenital LQT) or in patients taking other QT prolonging drugs or doses of fenspiride well above therapeutic. The goal of the present study was to characterize the effects of fenspiride on 3 ion channels which are known to play an important role in QT prolongation: hERG, late Nav1.5, and Cav1.2. Evaluating drugs against these ion channels and modeling with in silico action potential models is part of the new CiPA paradigm. In addition, we wanted to define the concentration-dependent risk of QT prolongation and arrhythmias associated with fenspiride. Using QT Fingerprinting methodology, fenspiride is predicted to be associated with concentration-related increases in Qtc. However, as indicated by the in silico action potential modeling, fenspairide was not associated with an arrhythmic markers (EADs) under healthy conditions. Fenspiride was associated with EADs in models of LQT3, congestive heart failure, and hypertrophic cardiomyopathy. This study shows for the first time the effects of fenspiride on hERG, late Nav1.5, and Cav1.2 recorded at physiologic temperatures and the associated arrhythmic risk profile of fenspiride. The results suggest that in healthy patients, while there may be some degree of QTc prolongation, there is no indication of arrhythmic events. The risk of arrhythmic events is predicted to increase when various cardiovascular risk factors are present.

The use of in silico cardiac action potential simulations is one of the pillars of the CiPA initiative (Comprehensive in vitro Proarrhythmia Assay) currently under evaluation designed to detect more accurately proarrhythmic liabilities of new drug candidate. In order to take into account the variability of clinical situations, we propose to improve this method by studying the impact of various disease states on arrhythmic events induced by 30 torsadogenic or non-torsadogenic compounds. In silico modelling was done on the human myocytes using the Dutta revised O'Hara-Rudy algorithm. Results were analysed using a new metric based on the compound IC50s against the seven cardiac ionic currents considered to be the most important by the CiPA initiative (IKr, IKs, INa, INaL, IK1, Ito, ICaL) and the minimal rate of action potential voltage decrease calculated at the early-afterdepolarization (EAD) take-off membrane voltage (Vmin).The specific threshold at which each torsadogenic compounds induced EAD, was exacerbated by the presence of cardiac risk factors ranked as follows: congestive heart failure?>?hypertrophic cardiomyopathy?>?cardiac pause?>?no risk factor. Non-torsadogenic compounds induced no EAD even in the presence of cardiac risk factors. The present study highlighted the impact of pre-existing cardiovascular disease on arrhythmic event detection suggesting that disease state modelling may need to be incorporated in order to fully realize the goal of the CiPA paradigm in a more accurate predictability of proarrhythmic liabilities of new drug candidate 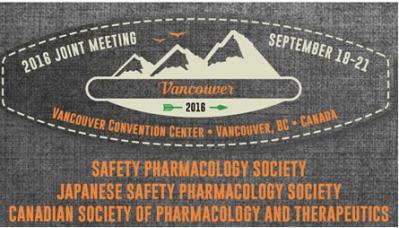 The goal of the CiPA paradigm is to allow the preclinical detection of not simply drug-associated QTc prolongation but also proarrhythmic events.  However, it is well known that the incidence of the drug-associated event of interest, torsades, is relatively rare.  We explored, using in silico action potential modeling, the influence of various underlying cardiac risk factors (heart failure (HF) and ventricular hypertrophy (VH)) on the incidence of proarrhythmic events (e.g. early afterdepolarizations, EAD).  At a pacing rate of 1Hz, under normal conditions, dofetilide (0.1-3nM) was associated with a maximal increase in APD90 of 70%, without EADs.  Free plasma concentrations of ≈ 2nM have been associated with a 74% increase in QTc and no torsades in healthy volunteers.  In contrast, under HF and VH conditions, EADs were observed beginning at 2nM.  Similarly, quinidine (0.3-5.4mM) was only associated with EADs at the highest concentration examined under normal conditions but under diseased conditions, EADs were observed at all concentrations above 0.3mM.  The non-torsadogenic drugs verapamil and ranolazine were also examined.  APD90 prolongation with verapamil (0.005-0.5mM) was modest, approximately 22-40% at 0.5mM, and under no conditions were EADs observed.  Ranolazine (0.575-23mM) was associated with a 59-72% increase in APD90 at 23µM but EADs were only observed in VH conditions and only at the highest concentration tested.  These results provide mechanistic support for the impact of pre-existing cardiovascular disease on arrhythmic events and suggest that in order to fully realize the goal of the CiPA paradigm, disease state modeling may need to be incorporated.

Aims: To investigate the putative usefulness of the in silico determination of transmural dispersion of repolarization (TDR) for early cardiac safety pharmacology. Methodology: TDR was calculated as the difference between epicardial-midmyocardial action potential duration (APD95) determined in non-failing human ventricular myocytes using the O’Hara-Rudy dynamic algorithm. The role of each ionic current in TDR was investigated by modifying its conductance in the algorithm. The effects of each tested drug on TDR were studied by reducing the IKr, INa and ICaL conductances in the algorithm by a scaling factor which is a function of the IC50 of the drug for IKr, INa and ICaL ionic currents and the maximal effective free therapeutic plasma concentration (EFTPCmax) of the drug. Results: Our simulations showed that TDR was increased by a preferential midmyocardial APD95 prolongation which was induced by net repolarising current reduction via IKr or IKs inhibition and/or ICaL or INaL activation. Drugs’ effects on TDR were in good agreement with their torsade de pointes (TdP) risk according to the CredibleMeds or the Redfern classifications: most torsadogenic tested drugs induced a TDR increase via IKr vs. ICaL and/or INa selective inhibition; while most nontorsadogenic tested drugs induced a TDR decrease via ICaL vs. IKr and/or INa selective inhibition. Conclusion: Based on computer simulations within the human situation, the present study identified the effects of various cardiac ionic currents on TDR amplitude and suggested that in silico study of drugs’ effects on TDR could be informative for early cardiac safety pharmacology. 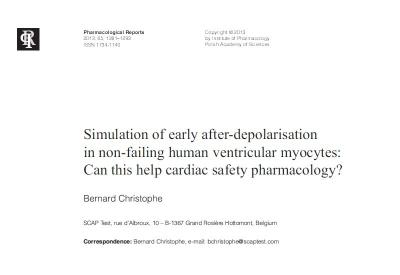 Background Identified as being the primary mechanism involved in the induction of torsades de pointes (TdP), early after-depolarisation (EAD) formation is an important parameter in cardiac safety pharmacology. Easily observed experimentally at the cellular or tissue level, EAD can also be simulated by computer algorithms using animal or human models. During the last decade, confidence in these algorithms has greatly increased.  We investigated the putative usefulness of EAD simulation for cardiac safety pharmacology.  Methods EAD simulations were performed in non-failing human ventricular myocytes using the O’Hara-Rudy dynamic model.  The role of each cardiac current was investigated by modifying the amplitude of its activity in the model.  Prediction of EAD induction by drugs was based on the ratio of their 50 % inhibitory concentration values for various cardiac ionic currents to their maximal effective free therapeutic plasma concentration (EFTPCmax).  Results In the ventricular endocardial myocytes, EAD was only induced by at least 85 % inhibition of the rapid delayed rectifier K+ current (IKr).   The other currents can either induce or prevent EAD under sub- (80 % IKr inhibition) or up-threshold conditions (87 % IKr inhibition) of EAD.  The study of the ability of drugs to induce EAD resulted in a classification which was in agreement with the TdP risk classification.   Conclusion Based on EAD computer simulation within the human situation, the present study identified the role of various cardiac currents in the EAD formation and suggested that prediction of EAD formation can be useful for early cardiac safety pharmacology.